Proud to Serve You in Canal Flats, BC 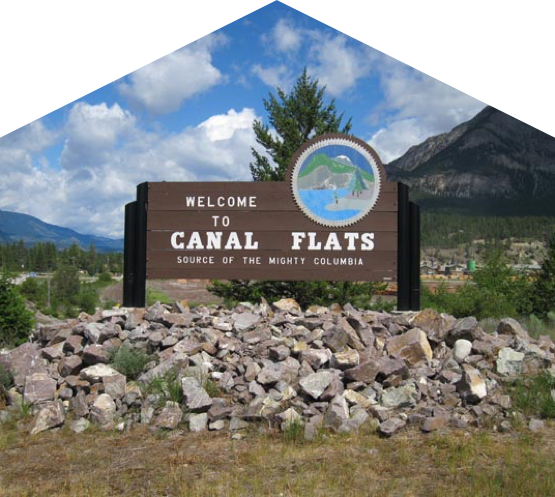 Canal Flats is a small town between between Skookumchuck and Fairmont Hot Springs in East Kootenay. Canals Flats got its name from the remains of a canal completed in 1889 that once connected Columbia Lake with the nearby Kootenay River. Today, Canal Flats is a spacious place to explore in a beautiful wilderness setting where people can go white water rafting, golfing and fishing.

Canal Flats is on Highway 93/95, between Skookumchuck and Fairmont Hot Springs, in the Kootenay River Valley. In 2020, there were 700. The village’s primary industry for nearly a century was timber, but in 2015 the sawmill stopped. In 2018, an enterprising group bought 1000 acres and established the Columbia Lake Technology Center and PodTech, a data centre design, build, and operation firm. Iris Energy, an Australian corporation, bought PodTech in January 2020 and is rapidly expanding its activities.

Canal Flats is the starting point for numerous backcountry provincial parks, including Whiteswan and Top of the World. Canal Flats is 1 km from the southern end of Columbia Lake, the source of the Columbia River, which flows north to Kinbasket Lake before turning south to Astoria, Oregon (1,960 km). Columbia Lake is surrounded by the Purcell Mountains to the west and the Rocky Mountains to the east. For pre-contact native Americans and early western explorers, the Kootenay River Valley was an important route.

Canal Flats, a 1.2-mile (2-km) wide berm of land, separates the Columbia’s northern and southern headwaters. The Kootenay River flows into the US before returning north to join the Columbia near Castlegar, BC.

David Thompson, who went through the area in 1808, dubbed it McGillivray’s Portage. Near Tilley Memorial Park (previously Canal Flats Provincial Park) are the ruins of an 1889 canal that connected Columbia Lake and the surrounding Kootenay River, hence the post office’s name of Canal Flats.

NEAR BY TOWNS
LOCAL POINTS OF INTEREST